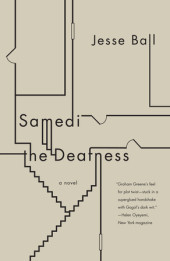 I read two books this weekend. One was Samedi the Deafness by by Jesse Ball.

Carl recommended it as a real champion, and he was right. It is a riddle of a book. It is like living in a cotton breast pocket of a giant liar. Who is this Jesse Ball? For one, he is a poet of some weighty concern. Here is an example, from a 2005 Boston Review.

to be told at gatherings

The resignation of the sheriff left nothing to be done. The populace of that tiny hamlet poured out into the cramped streets, half-dressed and quarrelsome. Shops were broken into. Women were vigorously affronted. Men too were affronted, with equal vigor and panache. Many living near the municipal zoo were beaten by a crowd of contrary children. I taught everyone a hymn I had written, complete with musical accompaniment. It went:

I pretend now to have made it up, but actually an old woman sang it to me when I menaced her husband with my little knife. I wanted their clothing, particularly her aubergine housecoat.

But don't be concerned for me. This sort of thing is what everyone does when everyone does it. And everyone who doesn’t does play along, or at least watches from the wings as those who do do what they do, whether well or wantonly.

And the sky will stream fitfully across the sky, its sails filled by the same wind that prompted us this morning when we rose, rosy cheeked and ham-handed from our all-too-narrow beds, filled with the same rippling restless pleasure that even now sits like a lantern in my youthful throat.

Crap that's good. He is a man of another time, and most certainly another place. He has me talking like a country peasant, and I think i like it. This is one of the best books I've read this year.

you sure can pick 'em, sir.