I am psyched to be one of the featured poets in this years Avatar Review. Seven poems, some with audio, and an interview with Howard Miller. Thanks to all the folks at Avatar for the inclusion. I think the issue came out great. 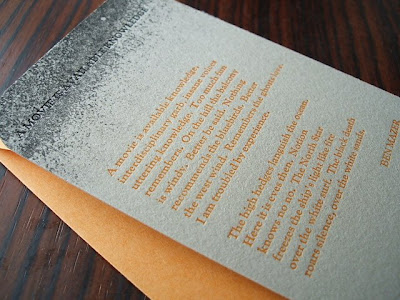 We have only 5 sets left the Coinsides #2 series at Brave Men Press. These are 3 gorgeous little letterpressed broadsides featuring poems by Ben Mazer, Eric Baus, and Elisa Gabbert that came in an edition of 23. There are also 4 Coinsides left of my poem, Telegram.

The new issue of Keyhole is available for pre-order. I have 5 poems in it. Its a great magazine. Peter Cole is a genius.

At the Black Ocean blog, I have a verbose review of Noah Falck's Measuring Tape of the Midwest. Its a great chapbook. You should buy it.

I have a poem in the new issue of the Gander Press Review.

I've been sending out a chapbook manuscript of THE BLACK EYE to contests and places reading. Slash Pine Press is one of the places I plan on sending to next. They're having a call for submissions for chapbooks until the end of June. It looks to be a really inspired venture, headed by poet Joseph Wood.

Breaking Bad is a show that I love. I watched every episode last week. It makes me want to shave my head. Bryan Cranston was the dad from Malcolm in the Middle. I love seeing comic actors turn. When challenged, all funny people prove to be inherently miserable.

In the middle of the night, two magazines came alive, the new elimae and diode. Me being awake, I read what I could. Here's what I remember taking.

The next is part of an adventure poem by Jason Bredle, who always entertains. I might have latched onto this one because of regionalism, or because every Boston team blew it in the playoffs last night, or both. Either way, I took it.

from Elegy for Roger Prynne
by Jason Bredle
until finally one afternoon I washed up in Boston harbor,
near the aquarium,
which I didn’t visit because
I’d spent so much time in the sea with all its dazzling creatures,
so I visited the place where that sitcom bar is,
which is real touristy,
and ate fried potatoes near a breakdance troupe
and cleaned myself up a little
because I’d been near death at sea for the past several weeks,
and slept for a long time after that,
waking up refreshed later which was good
because there was so much to see and do in Boston!
I’m kidding, there wasn’t,
but I was thrown out of Grolier’s after browsing
for only a few minutes, which,
apparently the mean woman
who works at or owns this bookstore doesn’t like,
that is, browsing or browsers or lovers of poetry,
though she said she was quixotic, which makes no sense
because she was black-hearted and angry
like the angry, black nights I spent at sea,
surrounded by its dazzling creatures,
sometimes riding upon them
but sometimes terrified of them as well,
like when the moon is full and sharks are circling you,
and you’d think that turbulent waters would be terrifying,
and they are, but just as awful are those nights of the full moon,
when creatures are circling you,
and the sea is quiet,
and those are the nights that you just close your eyes and cry,
close your eyes and pray that it will all end soon.

Justin Marks is a poet and proprietor of Kitchen Press chapbooks. His first collection is called A Million in Prizes. He also one of the next poets reading at The Deep Moat Reading Series. I have yet to read this collection, but recommend it on the basis of this poem.

I wanted to create the ocean, the sky,
the intricate structure of a leaf

and thought by now
I'd have come close.

What joy I have in knowing
creation of that sort

doesn't exist.
The world has little

use for me.
Its glare blinds.

How glad I am
for the orbit I inhabit.

A planet to the sun.

Read an interview with Justin over at Poetic Asides. If your in North Carolina, you can catch him reading here on the 16th.

Andrew Michael Roberts won this year's Iowa Poetry Prize with his collection Something Has to Happen Next. So far, it is my favorite collection of the year. Vibrant, short lyrics of meaning and mercy. As pointed out in this review, "When your entire arsenal consists of less than a dozen syllables you’d better hit it out of the park. And aside from his perplexing resistance to using capital letters, Roberts is able to conjure up funny and meaningful images with nearly no space or time."

the sunbeams halted
halfway down the sky,

the long train of cars dead
in the street, blurry from the rush

of trees racing past
on their way to work.

AMR will be the featured poet in the next SIR! Magazine which is due out this summer.

Available now from Brave Men Press in association with The Deep Moat Reading Series we present three new coinsides: one for each reader present at the May 8th event.

This series features Ben Mazer with his poem, A Movie Is Available Knowledge... 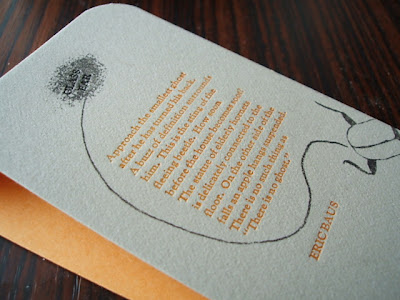 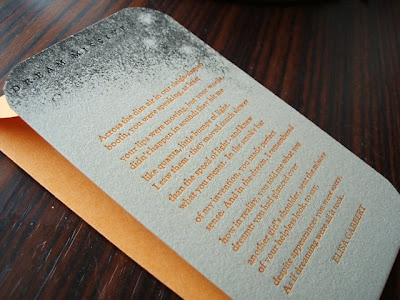 
Each CoinSide is 2 3/8" x 4" and contains a printed image along with the poem in hand-set type. Each is printed in a limited edition of 23.
You also may buy the set of all three for a minor discount.... 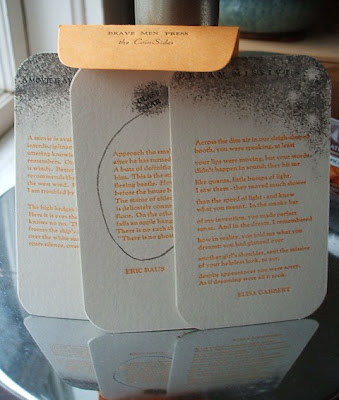 Ben Mazer's poems have appeared or are forthcoming in Harvard Review, Verse, Stand, Fulcrum, Salt, Agenda, Poetry Wales, The Warwick Review, Harvard Magazine, Jacket, Thumbscrew, Pequod, Jewish Quarterly (London), and many other periodicals. He is the author of one full length collection of poems, White Cities (Cambridge, MA: Barbara Matteau Editions), to which Robert Lowell's friend Frank Parker contributed a cover and frontispiece illustration, and two chapbooks, The Foundations of Poetry Mathematics (NY: Cannibal Books) and Johanna Poems (NY: Cy Gist Press). He is the editor of Selected Poems of Frederick Goddard Tuckerman (forthcoming from Harvard University Press), Landis Everson's Everything Preserved: Poems 1955-2005 (Graywolf Press; winner of the first Emily Dickinson Award from the Poetry Foundation), and The Complete Poems of John Crowe Ransom (forthcoming). He is a contributing editor to Fulcrum: an annual of poetry and aesthetics, for which he has edited feature anthologies on 'The Berkeley Renaissance' and 'Poetry and Harvard in the 1920s'.

Eric Baus was born in Fort Wayne, Indiana in 1975. Winner of the 2002 Verse Prize, selected by Forrest Gander, his publications include The To Sound (Wave Books), Tuned Droves (Octopus Books), and several chapbooks. He edits Minus House chapbooks and is currently in the PhD program in Literature and Creative Writing at the University of Denver

Elisa Gabbert is the poetry editor of Absent. Her recent poems have appeared in Colorado Review, Diagram, Eleven Eleven, Meridian, Pleiades, Typo and Washington Square. A chapbook, Thanks for Sending the Engine, is available from Kitchen Press. She is also the author, with Kathleen Rooney, of Something Really Wonderful (dancing girl press, 2007) and That Tiny Insane Voluptuousness (Otoliths Books, 2008). Their collaborations can be found in Boston Review, Caketrain, jubilat, No Tell Motel and other journals.


Coinsides (i.e. tiny letterpressed limited edition broadsides) for all three poets will be available by Brave Men Press in celebration of the occasion.

All readings are free and open to the public. Wine is guaranteed if you get there early.

All readings are held at the Pierre Menard Gallery.


Hope to see you there,
Brian

Who holds the rights to the poems of Bertolt Brecht?

Does anyone know how to go about finding the stewards of his work? I figure since the economies down, now is the time to make them an offer.

If you are in your right, skeptical mind, one would acknowledge that blurbs on the backs of book jackets are not garnered praise. They are solicited endorsements meant to advertise. Though their recommendations may be truthful, blurbers are not asked to give a truthful opinion. They are asked to favor. Because advertisements are on every source of surface outside our own skin, hyperbole is somehow thought of as harmless, especially when it comes to small time writers because the world exists in such a minute dirty puddle in an otherwise lashing rainstorm. We instead should consider it like we'd consider a celebrity magazine - a vacuous obfuscation that misleads potential readers and parties down exhausting roads as to waste their time, money, and effort to find a better text. What is a better text is anyone's opinion. In a small world though, it is usually does not arrive blowing on a rape whistle soliciting successful strangers for a fuck in an attempt to get its name out there. That's what your friends are for.