I published a poem at Ink Node. Its called Old Movies.

You can go and look at it and then rate it, right here. 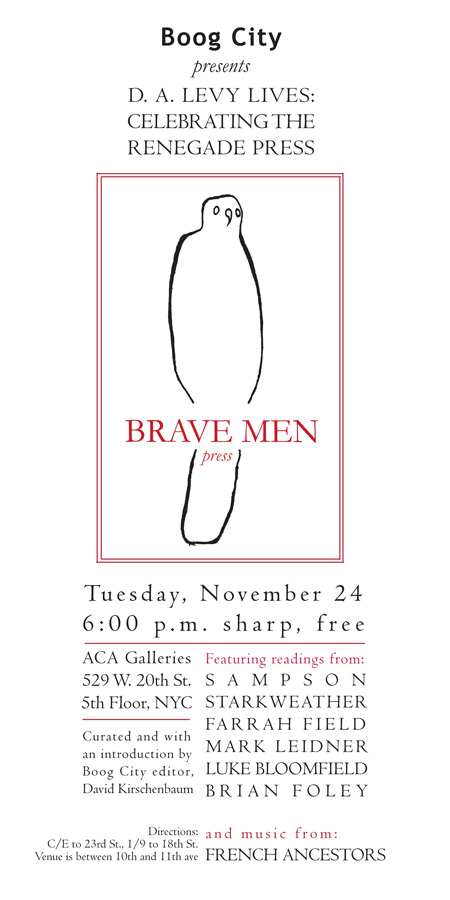 Brave Men Press will be in the East Village tonight for a special showcase. Farrah Field, Sam Starkweather, Mark Leider, Luke Bloomfield, and myself will be reading. We will have copies of our new chapbook by Julia Cohen, THE H IN GHOST for sale for the first time. Come and shake.

I wish you tamed. I wish what you fear—
A night alone in the forest.

A father who leaves you there. I wish you
Were ten years old again. And in love

In the field. A lump in your chest. A doctor
Who won’t touch it. I wish you’d live forever

Who made them. I wish you would
Sniff a man. I wish his whip

Sharper than fangs. I wish you could know
How bite-less I feel, the mouth

I don’t close, his head in my throat.

I have just found something...

I won’t stick my chest out before someone else’s firing squad
just so history might say I passed that test. That’s no way
to live. Gunpowder speaks for itself. To be alive at this party
you have to be conscious of your breath. I am party-conscious,
and you are not. Thank goodness we are both breathing,
my arm cast across the bed and over your body,
and I am waiting to be told what it is I feel under my arm,
a tap-tap not unlike the near-hopeless rhythm of someone
signaling from beneath infinite rubble. It may be my heart.
It may be your heart. There is infinite rubble on the news.
There are infinite contexts in which an open heart is not
nearly a good thing, contexts I do not nearly wish to name.

Among the principles the Zapatistas enunciated were mandar obedeciendo (lead by obeying), para todos todo, nada para nosotros (everything for everyone, nothing for ourselves), and preguntando caminamos (walking we ask questions). These mottos articulate a flexible, modest, hopeful, quixotic grasp of how to step forward without stepping on anyone. “Walking we ask questions” is one of their ways of insisting that they do not have answers – “our specialty is proposing problems”, they say, not solutions – and that questions can carry you forward. The Zapatistas made it clear that the old Left – domineering, centrist, convinced that if it ran the state then the state would set us free, ready to pass judgment, fond of one-size-fits-all answers, full of its own globalizing tendencies – was dead. They were too polite to put it quite that way, but there it was, and a hazy yet often luminous new political-cultural era has arrived.

I see the insurrectionary diffidence of the privileged young around me as inspired by this, up to a point. It is as though they have vowed never to be bullies again, but in so doing find it hard to stand up for (and to) things. I like the humility, the gentleness, but I want those that come after me to dream big dreams and try to change the world – to feel powerful, with all the burden and opportunity that goes with that power. “Engaged withdrawal,” the term for the creation of alternatives and the refusal to participate in what is seen as corrupt, can be an effective mode of social and political change, but sometimes engagement is necessary.

Mathias, this is just wonderful

Anniversaries. The Berlin Wall, of which my uncle once brought my family a small chunk; and this time last year I first read Georg Trakl. A friend told me his name was pronounce "gay-org."

My Heart at Evening

Toward evening you hear the cry of the bats.
Two black horses bound in the pasture,
The red maple rustles,
The walker along the road sees ahead the small
tavern.
Nuts and young wine taste delicious,
Delicious: to stagger drunk into the darkening woods.
Village bells, painful to hear, echo through the black
fir branches,
Dew forms on the face.


From 20 Trakl translations by Robert Bly and James Wright,

This version of The Heart... differs greatly from the Daniel Slimko version. The rhythm, the breaks. Over the editor of the Liliput Review talks about Trakl's influence on Wright.

I Was Afraid of Dying

Once,
I was afraid of dying
In a field of dry weeds.
But now,
All day long I have been walking among damp fields,
Trying to keep still, listening
To insects that move patiently.
Perhaps they are sampling the fresh dew that gathers slowly
In empty snail shells
And in the secret shelters of sparrow feathers fallen on the
------earth.

I bought this book to be sure

If you're not like me, you can view all of James Wright's collected poems here.

Tomorrow night I read at the Slope Reading Series with Chris Tonelli and Janaka Stucky. It's at The Rendevous and starts at 7pm. 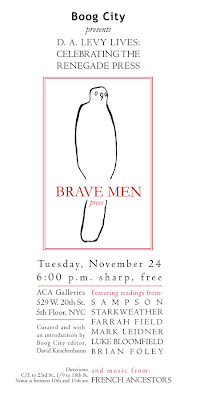 Brave Men Press has been invited by Boog City to take part in its D.A. LEVY LIVES: CELEBRATING THE RENEGADE PRESS series. On Nov 24th we will invade NYC

Farrah Field, Sampson Starkweather, Mark Leidner, Luke Bloomfield and myself will be representing. Music will be performed by French Ancestors.

There will be wine, cheese, and crackers, too.
Curated and with an introduction by Boog City editor David Kirschenbaum

**Luke Bloomfield**
http://glitterponymag.com/poetry/Luke-Bloomfield/56-Booms/
Luke Bloomfield is a co-editor for notnostrums journal and a Juniper Fellow at UMass Amherst. He has poems recently published in Glitterpony and Invisible Ear and other places. He is an out of work translator. He has read for 55 seconds at the Minutes Reading Series. He is a member of the Western Massachusetts Robert Walser Society.
**Farrah Field**
http://www.adultish.blogspot.com/
Farrah Field's first collection of poems, Rising, won the 2007 Levis Prize and is out from Four Way Books. Her poems have appeared in many publications, including The Mississippi Review, Margie, The Massachusetts Review, Pool, Typo, Harp & Altar, 42Opus, La Petite Zine, and Sojourn, and are forthcoming in Pebble Lake Review, Another Chicago Magazine, Fulcrum, and The Pinch. She lives in Brooklyn and blogs at the above site.
**Brian Foley**
http://www.eunuchsblues.blogspot.com
Brian Foley has poems in Front Porch, Sixth Finch, LIT, Strange Machine, No Tell Motel, Keyhole, Sleeping Fish, and Avatar Review among others. His chapbook The Tornado is not a Surrealist is out from Greying Ghost Press. He edits the online schism, SIR!, is poetry editor of Brave Men Press, and runs The Deep Moat Reading Series in Cambridge, Mass. He attends grad school for poetry at UMass Amherst and lives in Northampton, Mass.
**French Ancestors**
http://www.myspace.com/itsfrenchancestors
French Ancestors is the moniker of Jesse Duquette, formerly of Boston pop mavens Emergency Music.
**Mark Leidner**
http://trembyle.livejournal.com
Mark Leidner grew up in Tifton, a small town in south Georgia. His two chapbooks are The Night of 1,000 Murders (Factory Hollow Press) and The Empire (Scantily Clad Press). He lives in Northampton, Mass. and his blog is located at the above site.
**Sampson Starkweather**
http://www.typomag.com/issue12/starkweather.html
Sampson Starkweather lives in the forest. His most recent chapbook is The Heart is Green from So Much Waiting from Immaculate Disciples Press. He is also the author of City of Moths from Rope-a-Dope Press and The Photograph from horse less press. Recent or forthcoming work can be found in Action Yes, Typo, Sink Review, SIR!, Open Letters Monthly, Pax Americana, RealPoetik, and Ekleksographia.
----
Directions:
C/E to 23rd St., 1/9 to 18th St.
Venue is bet. 10th and 11th avenues 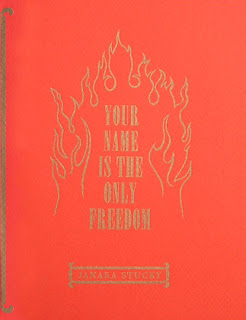 Brave Men Press is pleased to announce the release of

YOUR NAME IS THE ONLY FREEDOM
by Janaka Stucky

Cover is letterpressed with gold ink on red paper.
Printed in a limited edition of 60.
23 pages.

Janaka Stucky has had poems appear in Cannibal, Denver Quarterly, Fence, Free Verse, No Tell Motel, North American Review, Redivider and VOLT. He is the publisher of Black Ocean and its literary magazine, Handsome.