There is ice. I feel okay about it. I spent yesterday inside cleaning/sorting some things. I hung books on a wall mounted book shelf. I love that thing. I will put them strategically around the house. I began putting a manuscript together. Then I wrote a new poem to join the manuscript. I'm beginning to realize many of my poems focus on desperate forms of escape. Characters on the lam. I sometimes wish to be on the lam.

ON THE LAM -- "According to Mencken's 'American Language' and the 'Thesaurus of American Slang' by Berry and Van den Bark, 'lam, lammister' and 'on the lam' -- all referring to hasty departure -- were common in thieves' slang before the start of this century. Mencken quotes a newspaper report on the origin of 'lam' which actually traces it indirectly back to Shakespeare's time -- 'Its origin should be obvious to anyone who runs over several colloquial phrases for leavetaking, such as 'beat it' and 'hit the trail'.The allusion in 'lam' is to 'beat,' and 'beat it' is Old English, meaning 'to leave.' During the period of George Ade's 'Fables in Slang' (1900), cabaret society delight in talking slang, and 'lam' was current. Like many other terms, it went under in the flood of new usages of those days, but was preserved in criminal slang. A quarter of a century later it reappeared.' The Sage of Baltimore goes on to quote a story from the 'New York Herald Tribune' in 1938 which reported that 'one of the oldest police officers in New York said that he had heard 'on the lam' thirty years ago." From the "Morris Dictionary of Word and Phrase Origins" by William and Mary Morris (HarperCollins Publishers, New York, 1977, 1988).

I read this week The Motel Life by Willy Vlautin, as suggested by Carl. It took me back to writers like Raymond Carver and Denis Johnson, writers I began forming my own ideas with. Vlautin is all story; all authenticity, no style. Read it during winter. 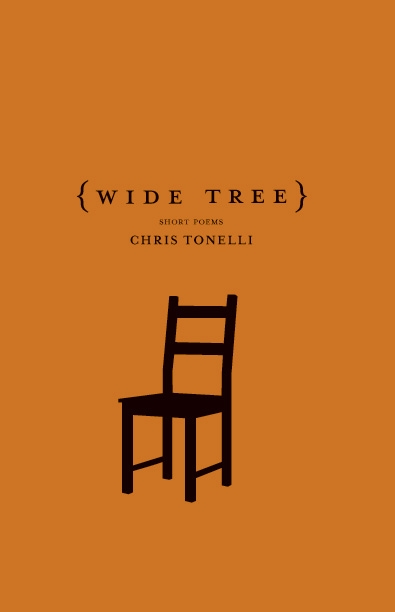 Also read Chris Tonelli's Wide Tree, a pleasurable and quick collection of short poems. The first five or six capture a T commuting experience, and live in the same realm as Lunch Poems. These experience could take place on no particular train in no particular city. Here is a nice excerpt from that section.

I had a dream that
the train seemed
important in passing,
something charged.
And I felt as if I was
easily going to have
sex w/ somebody
on that train. But, as
usual, it was someone
on the train before.

With his brevity and humor, you can't help be reminded of Berrigan.
I especially like his use of "w/"
It appears several times and makes the ideas more personal, like a quick thought relayed under pressure of leave. But by far my favorite in the collection is Bedroom in Arles, which appeared in Real Poetik.

My friends say that they
would like to see different
furniture in my poems. That
after the umpteenth bird
or tree, they start to feel
less and less for them. I
think of Van Gogh and how
my friends must be right—
it is nice to see a bed
once in a while. A chair.

I like this sentiment, the bare self awareness and need for change. The objectification of birds and trees as furniture, from living things to the nonliving things, is a I like Chris's poems. One day, when this blog is gone, and Bedroom in Arles is no longer online, you're going to miss it. Buy the tangible copy here